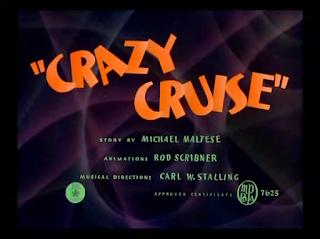 Original release date: 3/14/1942
DVD AVAILABILITY: Wrongly included in a disc of Bob Clampett cartoons on Looney Tunes Golden Collection Volume 5.
You can see a decent version of this cartoon HERE.

<><><><>
This is it. Production #455 was the last of Fred Avery's supervisions to go through the animation process at Leon Schlesinger's studio. By this time, Avery, now allowed to use his nickname Tex, was probably at work on Red Hot Riding Hood or another of his earliest Metro-Goldwyn-Mayer efforts.
I don't think anyone ever asked him about these after-the-fact last Schlesinger films. It would be revealing to know what he thought of them--if indeed he gave them the time of day. Avery didn't seem the type to reflect on what he'd done in the past. It's not the worst final cartoon (and compromised "film maudit" to boot) anyone ever made, and it might be too much to expect a last blaze of inspiration and fervor in a film finished by other hands.
Sans director credit, this final spot-gag travelog provided groans and chuckles before going to the ether of cartoons that didn't get reissued. Revived for TV fodder, the cartoon aired uncut for years before someone bothered to watch it and caught the morbid/racist gag deep within it. That bit was then snipped out, making a compromised film less itself.
Read more »
Posted by Frank M. Young at 4:10 PM 22 comments:

Aloha Hooey: A Fond Farewell and a Future Comedy Template 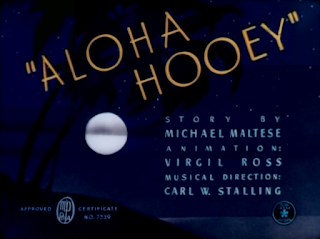 Original release date: 1/31/1942
No DVD/BR availability. This cartoon may eventually be restored for the new HBO-Max streaming service (with title cards created by amateurs, but oh well...)
You can see a good-quality (tho' time-compressed and watermarked) version of this cartoon HERE.

<><><><>
Before we get going today: was anyone out there able to capture the HBOMax restoration of Tex Avery's Hamateur Night? If so, would you be willing to share it with me? I long to see this public-domain masterpiece in its restored glory, and would update my post on that cartoon with the new version. If you were among the lucky few who captured it for the 33 minutes it was available and can share it, please contact me in the message option at the end of this post. Thank you!
Read more »
Posted by Frank M. Young at 4:19 PM 5 comments:

The Cagey Canary: A Late-Blooming Hybrid 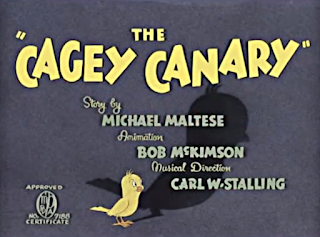 Original release date: 11/22/1941
The surviving copy is a Blue Ribbon reissue from October 11, 1947.
The original title card has surfaced, and shows no director credit, as is typical for a Leon Schlesinger production released after a director quit or was fired.
You can see a good-quality (tho' time-compressed) version of this cartoon HERE. No DVD or Blu-Ray release of this cartoon  yet exists.

<><><><>
A pretty good (and mostly mute) predator/prey comedy, The Cagey Canary feels more like a Friz Freleng cartoon than Avery's work. Freleng would soon release a similar cartoon, Double Chaser, as he worked his way toward Tweetie Pie, his Oscar-winning 1947 classic. If the credits of this original title card are at all reliable, Michael Maltese provided the story for this short. Its tit-for-tat humor, variations on a central (and threatening) action and what dialogue it has syncs up to Maltese's work with Freleng. It's less talky than Maltese's writing for Chuck Jones, but its structure and its character dynamics are accomplished.
Maltese filtered through the detached chess-match of Avery's comedic eye, it again shows how close these late Schlesinger cartoons approach the look and feel of Avery's M-G-M classics. His drawing style is still buried deep within Robert McKimson's character designs. With their tendency towards better animation, the added bells and whistles slow Avery's timing down--with one gag taking a hell of a long time to get across. Let's wade in and have a look-see...
Read more »
Posted by Frank M. Young at 5:12 PM 8 comments:

Wabbit Twouble: A Small Addendum to An Outstanding Podcast

You can view a nice copy of this cartoon HERE.

This may be the most perfunctory post on this blog, since others have already covered, in good detail, what I might have observed about Wabbit Twouble, the last Avery-instigated Bugs B unny cartoon.

That Komoroski and Bob Jaques devoted the fourth episode of their must-hear podcast Cartoon Logic to Wabbit Twouble. You may listen to that episode HERE. 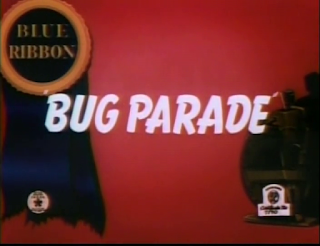 You can watch a better-than-average TV version HERE.

The original credits for this cartoon may or may not have had Fred Avery listed as supervisor. Like many Warner Brothers cartoons, this one lost its original credits when reissued 11 years after its first run, at which time Avery was winding down his time at Metro-Goldwyn-Mayer. Bug Parade was the last thing on his mind then, unless he happened to go see a movie in mid-July 1952 and saw it as part of the program.

Bug Parade was probably titled The Bug Parade in its 1941 release, in a reference to the 1925 silent war film The Big Parade, King Vidor's epic drama of the First World War. The punny title hung on a cartoon with no connection to that cast-of-bazillions film. It would have gotten a laugh from older theatergoers who might have seen the original run, or the film's 1931 reissue with a musical score.

We open with a complex display of insect transit, as our narrator, who sounds like Robert C. Bruce but may not be him, comments in that sunny, condescending tone we've come to expect. 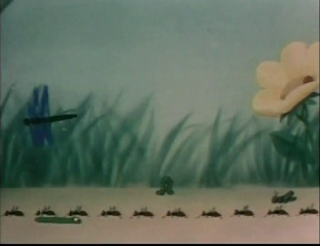 "The Garden of the Moon," a winsome tune by Harry Warren, Al Dubin and Johnny Mercer (and from the 1938 picture of the same name) underscores this ground-level pageant. Narrator promises us of "little-known facts in the lives of these tiny creatures."
Read more »
Posted by Frank M. Young at 6:33 PM 5 comments:

All this and Rabbit Stew: Bugs Bunny's Most Shocking Moment 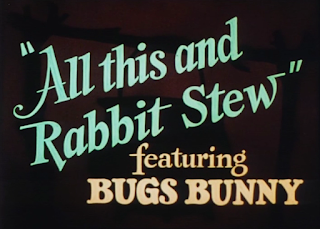 AVAILABILITY: On many dollar-store VHS tapes and DVDs, and online, usually in atrocious visual quality.

You can view a better-than-average version of this cartoon HERE, but be aware it contains an appalling stereotyped black character.

The first Avery cartoon released without a director credit, All this and Rabbit Stew is the lowest moment in the screen career of Bugs Bunny. Never re-issued, for reasons obvious the moment the credits end, the cartoon was pillaged for gags in later WB cartoons. Like Bugs Bunny Nips the Nips (1944), it's a Bugs episode few have seen. The cartoon speaks well of no one involved, from the beloved series star to its writer and director.

Making peace with the racism rife in classic animation is a cross its historians have to bear. Baked into America's collective consciousness in the 20th century, racial and cultural prejudice is the bleak flipside of the nation's all-inclusive ideal. Wars were fought, lives were lost and ill will flowed through the country's veins as non-Anglo-Saxon people were thought of as less than human or "not as good as us."
Read more »
Posted by Frank M. Young at 2:50 PM 7 comments:

Aviation Vacation: No Cause for Elation 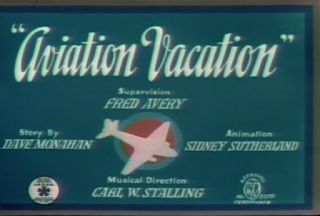 You may view a not-so-hot but uncut print of this cartoon HERE. The screen grabs are provided by our great pal Devon Baxter, and make this frequency of posting possible. Please check out and support Devon's Patreon page. He's doing superb work in determining who did what in these classic cartoons, where the film credits usually bely the artists who worked on them.

Here we go with the last year of this blog. I intend to complete this project in 2020. I've dawdled too much, and have often set this blog aside when paying projects demanded my attention. I'm so close to the finish line (and semi-retired) now that I resolve to get through this final spate of Avery-at-WB cartoons as often and as well as I can.

There are still some surprises remaining in Avery's Schlesinger cartoons. Few are seen in Aviation Vacation, a film notable for the birth of one of its maker's most inspired moments. This gag, refined to perfection in the 1952 release Magical Maestro, is the main joy of this by-the-book spot-gagger.

This was the last spot-gag cartoon completed by Avery before he left the Leon Schlesinger studio. Surviving prints look as bad as many of Avery's M-G-M cartoons. It's never been restored for reasons soon apparent. When shown on television, about a minute of footage went missing. Again, all will be revealed...

I check old posts to make sure there's a working link, if an online version of the cartoons discussed here is available. If you notice a link is dead, or disabled, please let me know.
As well, if you have a better copy of any of these cartoons posted online, and are willing to share the link(s), please do so. It will benefit anyone who visits this blog. Thank you...